Help this game reach its goal

You had heard the legends before, of course, everyone had.  Now that you know the creature is real, one thought keeps playing through your mind:

Their eyes were… beautiful. You want to see them again.

Okcryptid is a tarot-based, GMless roleplaying game about finding mysterious, secretive, beautiful creatures, and hopefully, dating them. It can be played by 2-5 players, or as a solo journaling experience.

It is also an official recipient of a Sprinting Owl Designs Sprinty Award, as well as a Baffy Award!

In order to download this game you must purchase it at or above the minimum price of $7.50 USD. You will get access to the following files:

Support this game at or above a special price point to receive something exclusive.

If you'd like to get this game, but cannot afford it right now, and especially if you are part of a marginalized community, you can get a copy for free or whatever you can afford here. Each purchase of the game at the regular price point adds another community copy, and purchasing it for $15 adds two copies to the pool.

This review is an amalgam of two after session reports I wrote in a TTRPG server I'm in on Discord:

It was blast. We came up with our cryptid to attempt meeting and wooing was a Will-o'-the-Wisp which we had decided was the trapped soul of some lesbian from long ago who had arranged to meet up with her sweetheart at this lighthouse. She waited and waited but her sweetheart never came. She continued to wait until her soul left her body in despair.

When my friends and I wrapped up our game it was a bittersweet. It's worth noting that this is a different version of the game than I had played with my roommate once before. I had an ashcan version, but when I brought my friends together we were now using the full version which is significantly better is basically every regard.

Unfortunately, the dice were unkind and our cryptid consumed us. All but one of us was destroyed and turned into will o' wisps. My character, Aoife Self-Insert, had been pulling a Neo in the train station of the Matrix trying to wingwoman the shit out of the situation, but instead Aoife fell into a coma she never woke up from.

It was a good time. Highly recommend this game to everyone.

Reply
RollForFelicity253 days ago(+2)
This game is such a blast! I was lucky enough to play it with Tadhg and had such a good time. In fact, we had such a good time that I'm already planning another session of it! The rules facilitate a great story and it vacillates quickly between goofy and tense! The playingcards.io template is really helpful in making the game go smoothly while playing online. I'm also excited to try the other modes of play!
Reply 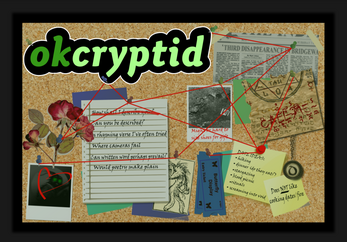 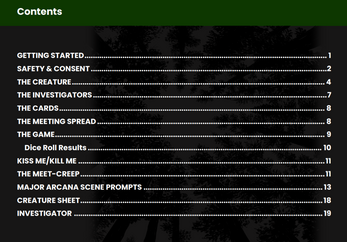 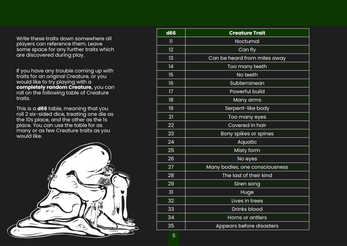 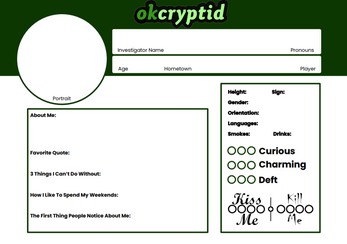